Was Heather O’Rourke of “Poltergeist”
Fame Killed In A Pedogate Coverup? 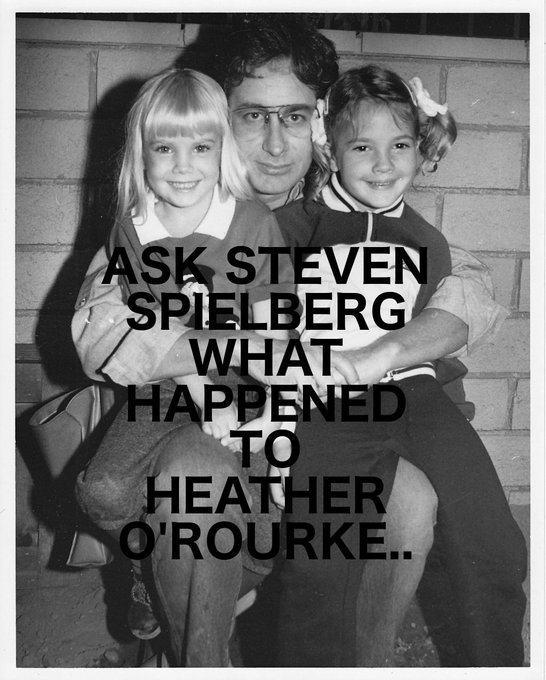 Whether this is a highly organized ring of pedophiles or just some bad apples is a hot debate but when you mix, money, power and international fame things tend to get messy.

Heather was born in 1975 and died at the age of only 12 in 1988 from intestinal stenosis–a severe bowel obstruction that the girl evidently had from birth.

The obstruction caused an infection that, in turn, brought on septic shock. The shock prompted full cardiac and pulmonary arrest.

As terribly heartbreaking as this is, there may be much more to the story.

Famed gossip website http://www.crazydaysandnights.net/ has for years been a source for behind the scenes gossip about sordid events going on in Hollywood.

He keeps the identities of those in question secret but usually gives enough details that with some google searching it can be narrowed down to a few people.

Nov. 9, 2017
Back in the mid-80’s was peak child molesting time in Hollywood. There was no internet. There were very very few mobile phones. Children came to the set where they were left alone by their parents. For the next 8 hours they were subject to every kind of horrible thing you can imagine. Drugs were commonplace. They were used to try and get the kids to not be so hysterical when being assaulted.

Producers loved casting shows with kids and tweens. If someone pitched a show that involved a handful of tweens with a dozen tween extras per week, it would get a green light.

As sad as it is to say, there were a lot of parents who told their kids to go off with the nice man in the suit and do what he says. It was a sick sick time.

It was just past the mid 80’s when a producer came up with the idea of a tween show that not only would feature a rotating cast of extras, but would make the studio a bunch of money because they would film quickly and not hire any adults.

Further, the faster they filmed, the more time they would have to molest all the kids that would be hanging around.

From the first day, it was the worst place on earth if you were a kid. The studio where the show was filmed also had several other shows being filmed there, most of which featured lots of children. Executives would drive over to Hollywood right before lunch and would stay at the studio for several hours each day.

Anyway, on this particular show, there was a special guest star. A very special guest star. Still not a tween, everyone knew who she was. Executives flocked to the studio that day to see her. She was first molested when she was 5 or 6 and had continued to be molested throughout her hit movies and also on a previous show.

One of the stars of the show who has spent her life bouncing in and out of rehab because of what she saw, and who was actually nominated for awards from the show, described the atmosphere that day.

“A bunch of f**king pigs. I had just turned 12 or 13. I was the same age as the actress coming in. Maybe a little older. We had been shooting for months and I was old news. They knew I would do what they wanted, but they always wanted someone new. This was someone new and someone they all knew.

They had it set up like a peep show almost. She had finished shooting that morning and they brought her out on a stage. The stage was used most of the time for a game show that was taped there.

That game show is still on today. I can’t watch it knowing what happened to her there. They brought her out and the front four rows of this theatre were filled with guys who were already rubbing themselves.

The girl was wearing a bikini. The show took place around a beach just so they could make these girls wear next to nothing.

They had her walk around under the lights. The lights were focused on her and she couldn’t really see out to the audience. She was squinting. It must have been blinding for her. They had her walk back and forth. Then they had her start dancing.

All of these guys were doing what another star at that same studio got busted for. This went on for about 20 minutes. Then three of the guys took her to a different area of the studio.”

The actress didn’t see what happened, but about 45 minutes later, one of those three guys came running out and needed a set medic.

Apparently they had inserted something inside the girl and things were bad. The medic came and the ambulance came. The parents of the girl were told some crap story.

That crap story ended up killing the girl because the parents believed the executives. Two weeks later, the show finished shooting six episodes all at once and then everyone was sent on their way forever.

No one wanted the kids around or any witnesses to what happened.

LOS ANGELES (AP) – The death of 12-year-old ″Poltergeist″ actress Heather O’Rourke was ″distinctly unusual″ because she lacked prior symptoms of the bowel defect that reportedly killed her, gastrointestinal doctors say.

″I would have expected a lot of (digestive) difficulties throughout her life and not just to have developed a problem all of a sudden,″ said Dr. Daniel Hollander, head of gastroenterology at University of California, Irvine, Medical Center.

Other specialists, also unconnected with the case, said Wednesday it was possible she died as the resulted of a birth defect, but added that the circumstances of her death were extremely unusual.

A private funeral was scheduled for Friday at Westwood Village Mortuary in Los Angeles for the blond youngster, whose character encountered ghosts and warned ″They’re heeeere″ in ″Poltergeist″ and ″They’re baaaack″ in the sequel.

Filming was completed on a third ″Poltergeist″ movie last June.

Terry Merryman, spokeswoman for Children’s Hospital of San Diego, said Heather died Monday of septic shock due to congenital stenosis of the lower intestine, or bowel. That means she died of shock caused by infection in the blood, which in turn was caused by a birth defect that made a section of her intestine abnormally narrow.

Such narrowing typically reduces bowel diameter to one-eighth inch instead of the normal half inch, impeding movement of food and fluid through the bowel. The defect usually is apparent at birth because it causes severe abdominal pain, vomiting and nausea, Hollander said, adding that it is very rare for the disorder to kill an older child who lacked prior symptoms.

Mike Meyer, the actress’ manager and lawyer, said Heather didn’t suffer chronic digestive problems, and the bowel narrowing wasn’t discovered until she underwent surgery and died on the operating table after suffering cardiac arrest en route to the hospital.